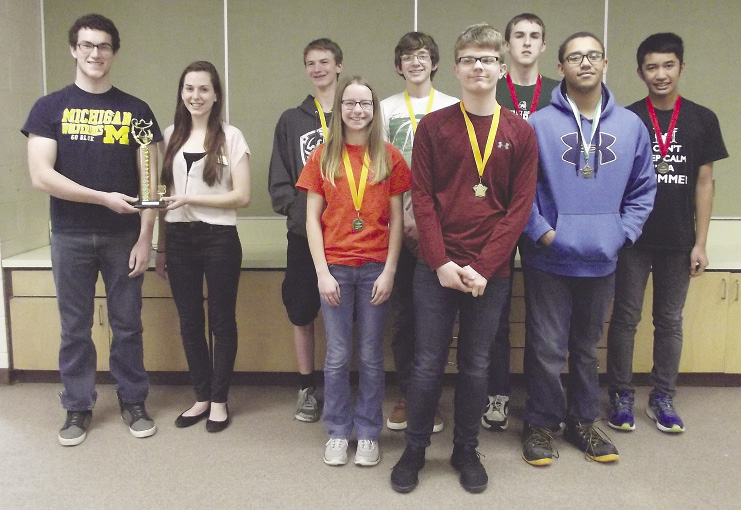 The Thumb Area Quiz Bowl League wrapped up its 18th year of providing academic competition to the Thumb area’s high school students. Eighty-five students from eight schools from Lapeer, Sanilac and Huron counties took home over 50 trophies and medals after competing in various events at the former Maple Valley School in Sandusky.
All participants were required to take a six-part qualification test which included ninety difficult multiple choice questions from the various subjects. Qualifiers were seated according to their top scores. With a total of 90 points available, the top-scoring qualifier, senior Macy Knoblock from Ubly, had a score of 59, which if being graded on a normal grading scale by a teacher, would be a “D.”
However, both Macy Knoblock and co-senior, Andrew Gilbert, were able to receive an “A+” for their performances last Thursday by tying for the annual TAQBL $250 college scholarship. Both Knoblock and Gilbert tied as both had identical point totals for their wins. Macy Knoblock was the champion for the Class of 2018 and in Language Arts. She also won third place in Science and The Arts. Andrew Gilbert won the championships in math and science and also took home runner-up honors for the Class of 2018.
Bad Axe Junior Jacob Shemka was the runner-up to Knoblock and Gilbert with championship wins in social studies and for the Class of 2019. Brown City senior Raymond Shavers came in third place overall with a first place win in The Arts and third place wins in current events and language arts. In third place, there was a three-way tie this year. Brown City senior, Logan Childers, took home the Current Events championship and third place for the senior class. Hannah Emerick, a sophomore from Harbor Beach, took home runner-up trophies for math and the Class of 2020. Sandusky sophomore, Kreigh Demisuay, was the champion for the Class of 2020 and won third place in math. And lastly, Gage Larson (Sandusky) and Kevin Doerr (Bad Axe) shared fifth place honors. Larson was the runner-up in current events and third place in social studies. Doerr was the runner-up in science and won third for the junior class. Medal winners for the Tournament of Champions were required to place in at least two events.
Other individual winners from Ubly included Kelsey Knoblock (Class of 2019), Josh Brandel (social studies), Rebecca Particka (The Arts), and Cole Messing (Class of 2021). North Branch winners included Charles Buckel (2nd-language arts) and Gabrielle Hadden (3rd-10th grade). Faith Powell, from Sandusky) also won third place for the Class of 2021.
The Winter 2018 League Championship tournament featured a two-game elimination brackets system, as opposed to the one-game elimination tournament system from the past. In round one action, it was Ubly over Harbor Beach (170-60), Brown City defeating Sandusky (140-100), North Branch A with a one-question win over North Branch B (125-110) and Bad Axe A had a win over Peck (110-85).
Round two saw Ubly win against Brown City (135-15), Bad Axe blanked North Branch A (105-0), Harbor Beach eliminated Sandusky (95-60) and North Branch B took out Peck (45-15). Round three saw Ubly hand Bad Axe their first loss ((105-70) and North Branch A being eliminated by North Branch B (85-70). North Branch A eliminated Harbor Beach (105-20) and North Branch B knocked out Brown City (90-70).
The semi-final round saw Bad Axe defeat North Branch B (90-60) who finished in third place. The championship round saw the two remaining teams face each other one more time. It all came down to the top two teams from the final TAQBL standings for the winter season, Bad Axe and Ubly. With Bad Axe losing a leading player (Jacob Shemka) who had to leave to attend band festival at Caseville, it was Ubly High ending the season at an amazing 27 win and 2 loss season and also taking home the championship plaque from the final event of the high school season.
All area high schools are now invited to consider enrolling in the TAQBL Fall 2018 season which starts on October 18th with tournament #1 to be held at North Branch High. For more information on enrollment, contact Bruce Irland, Director at quizbowlguy@gmail or 810-404-1535. 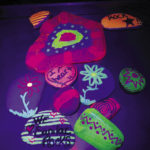