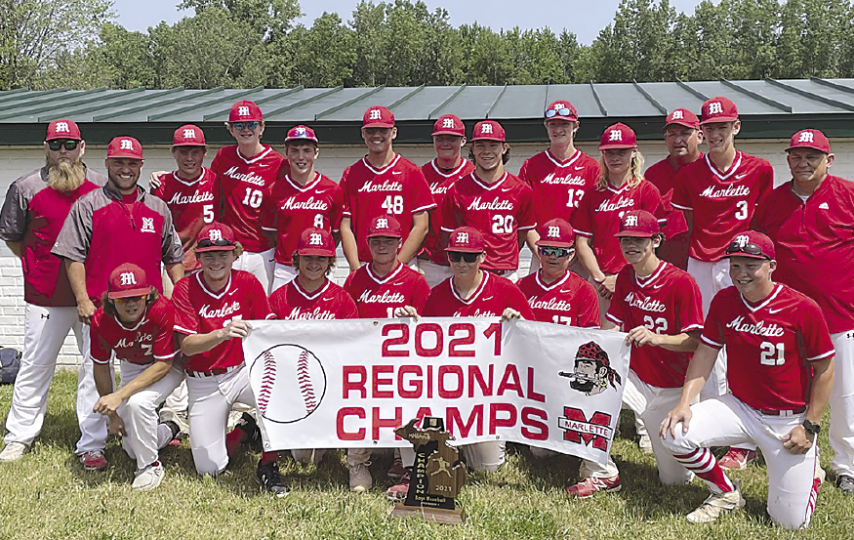 The Raiders took the first regional title in Marlette School history, when they defeated Muskegon (5-4) and Michigan Lutheran Seminary (7-6) last week in regional play.
Coaches Hayden and Marshall stated, “While preparing the game plan for regionals, we wanted to focus on playing our game. We worked hard to get to that point and wanted to keep it going. All aspects of our game are some of the best it’s been all season, pitching did their job, they hit their spots and got weak contact. Hitting right from the start of the regional final game came up big and provided big runs which allowed the pitchers to relax and pitch their game. Our fielding was solid all day and had some big plays.
Muskegon Catholic Central was a very solid team which knocked off the number one team in the state the game before. Ethan Marshall started and pitched 6 innings with 10 strikeouts only allowing 3 runs. Cody Hayden got the save closing out the last inning. In the first inning, the bats came out hot and scored 2 runs, then added three more later.”
The Raiders got their first runs in the first inning, when Aaron Bower doubled, scoring two runs. Muskegon tied the game up to 3 apiece in the bottom of the third, with the Raiders pulling ahead for good when two runs were scored in the fourth inning, when Cody Hayden singled on a 1-1 count, scoring two runs.
The Raiders had 11 hits in the game, with multiple hits from Travis Fuller, Grant Roberson and Aaron Bower. Travis Fuller was 3-3 at the plate.

Ethan Marshall got the win for Marlette, going 6 innings, allowing 3 runs on 5 hits, and striking out 10. Cody Hayden pitched one inning in relief.
The Raiders defeated Michigan Lutheran Seminary by one, 7-6, for a Marlette victory.
Coaches Hayden and Marshall said, “In the quarterfinal’s game, Saginaw Lutheran Seminary was also a very solid team. They liked to put the ball in play and make our defense make plays, which they did. We had early runs scored again, scoring 2. The pitching effort was combined with three pitchers, Cody Hayden, Gavin Gage and Grant Roberson who pitched the last three innings.
We are the first Marlette team in history to win a Regional Championship and continue on to make it to the final four. We’re a hungry group of guys looking to make more history this week.”
The Raiders had 11 hits in the game, Seminary 10. Marlette got things going in the second inning, when Ethan Marshall singled on the first pitch, scoring one run. In the bottom of the second, Michigan Lutheran Seminary tied the game, 2-2. The Raiders added three runs in the third inning. Gavin Gage singled, scoring 2 runs and Ethan Marshall grounded out, scoring one run. The Raiders built a five-run lead in the fourth, holding off Seminary for the victory. Aaron Bower, Gavin Gage, Grant Roberson and Cody Hayden all had multiple hits in the game. Gavin Gage and Aaron Bower each had three hits.
Cody Hayden got the victory for the Raiders, surrendering 2 runs on 4 hits, striking out 3. 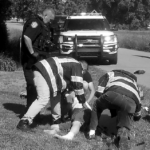