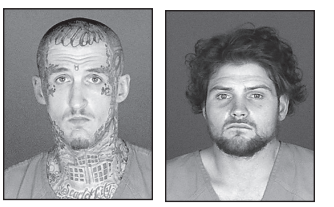 (Port Huron) Two Port Huron men have been arraigned following a drug raid in the city of Port Huron June 9th.
According to Sheriff Mat King, the St. Clair County Drug Task Force conducted an investigation into the sales of narcotics in the Port Huron area. The investigation ended with a search warrant being served at a residence in the 900 block of St. Clair Street last Wednesday at about 8:00 p.m. Once inside the home, members of the DTF located and seized a dealer’s quantity of heroin/fentanyl and methamphetamine.
The two men arrested, 31 year old Chad Hamilton and 26 year old Jesse Sawdon, were arraigned Sunday in 72nd District Court in Port Huron. Hamilton is charged with delivery/manufacture of methamphetamine, delivery/manufacture of heroin/fentanyl less than 50 grams, maintaining a drug house, resisting/obstructing a police officer and being a habitual 4th offender. His bond was set at $75,000 cash/surety. Sawdon is charged with possession of methamphetamine less than 25 grams and being a habitual 4th offender. His bond was set at $25,000 cash/surety.
Both men will face a probable cause hearing on June 22nd at 9:00 a.m. in Port Huron’s 72nd District Court.
The Sheriff’s Office Special Response Team and K-9 Unit and the U.S. Border Patrol K-9 Unit also assisted at the scene of the investigation