The Sandusky Wolves traveled to Capac this past weekend to compete in the annual Harry C. Moore Tournament. The Wolves faced off with host school Capac and put a hurting on them in their matchup. The Wolves led 31-11 at halftime and won the contest 49-33. Braden Bender led the Wolves with 13 points, 3 steals and 2 blocks. Kyle Guibord added 9 points, 5 rebounds and 2 steals. Kelton Bukoski chipped in 9 points. Barry Lester pulled down 9 rebounds, and finished with 7 assists, 5 steals and 3 points.
The Wolves punched above their weight class in the final with Imlay City. Imlay City got out to an early lead but a second quarter rally put the Wolves ahead by a point at halftime.
The Wolves outscored Imlay City 13-8 in the third quarter for a 45-39 lead to start the fourth. Imlay City played close in the fourth, forcing some tough looks from the Wolves. Sandusky’s Caleb Minard hit a clutch free throw with 10 seconds left in regulation to give the Wolves a one point lead before Imlay City’s Greg Pawlaczyk hit a three pointer at the buzzer to give Imlay City the win.
Braden Bender led the scoring charge for Sandusky with 11 points. Barry Lester added 10 points, 7 rebounds, and 3 assists. Andrew Bolsby had 8 points and 4 rebounds. Caleb Minard had 7 points and 3 rebounds. Kelton Bukoski added 6 points and 3 rebounds. Jackson Kartanys chipped in 6 points and rebounds. Sandusky hosts two home games before the Christmas break, battling Bad Axe on Wednesday before hosting Reese on Friday December 16th. The boys will have 12 days off before their next game against Deckerville at Little Caesar’s Arena on December 28th. 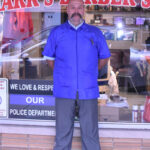