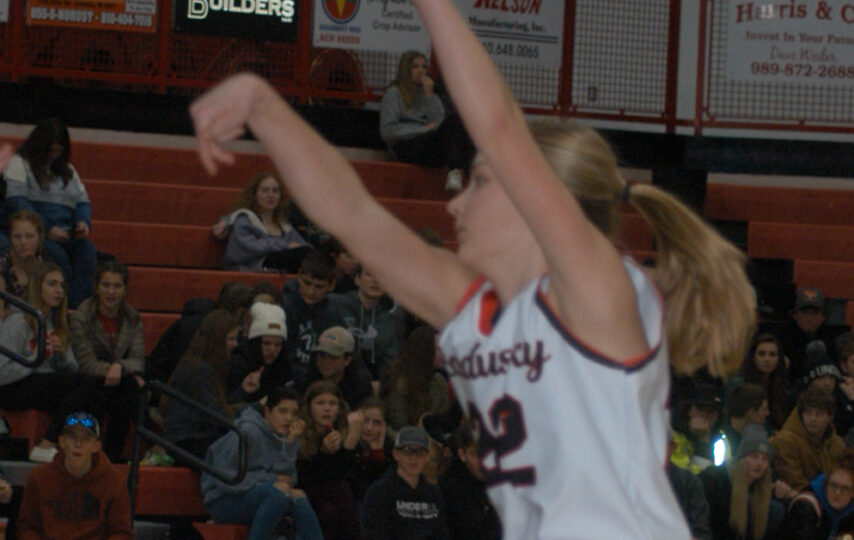 The Sandusky Lady Redskins played host to Bad Axe Thursday night in their closest match of the season so far. Bad Axe came out firing on all cylinders and led the game by 7 at the half, 17-10. Bad Axe pressed their advantaged to 13 points in the third quarter before the Redskins would start their scoring rally. Brooke Jansen was fouled on her shot and she chipped in two points from the charity for Sandusky to narrow the margin to just 11. Sandusky forced the turnover and Morgan Taege knocked down a 3 pointer from a foot behind the line. Bad Axe was fouled twice on the next trip down the floor and they canned 1 of 4 free throws to boost their lead: 24-15. Bad Axe would be fouled again on their next trip down the floor and failed to convert their free throws, bringing their free throw percentage to a dismal 35% through 3 quarters.

Morgan Taege’s defender gave her too much daylight and she knocked down another behind the 3 point line to bring the ‘Skins within 6. Madison Long came up with the steal and Abby Trepkowski knocked down the layup in heavy traffic to bring the score to 24-20 at the end of 3. Sandusky would foul Bad Axe at the start of the 4th and this time the Hatchets converted from the line to extend their lead to 26-20. Jenna Steeb knocked down a layup off the give and go from Trepkowski, 26-22. The Redskin press forced a turn over and Jenna Steeb would score again on the same play, this time with contact, and she cans the free throw to bring the ‘Skins within one: 26-25. Bad Axe scored from down low to push the score to 28-25 and Emmy Bender answered with a lay up of her own to bring the ‘Skins back within one. Bad Axe scored another from down low with 4 minutes left to go and this would end up being their final score of the evening. Madison Long was fouled on the other end of the floor and went to the line for the one and one and failed to convert. Emmy Bender came up with the offensive board and dished it to Abby Trepkowski, who knocked down the 3 pointer from the baseline to tie the game 30-30. Sandusky’s defense forced a turnover and the Redskins dribbled it to half court before Al Demott called a timeout with 2 minutes to go in the game. The Redskins took the clock down to 45 seconds before a Bad Axe double team would force the turnover. Bad Axe missed the shot from point blank and fouled Brooke Jansen on the rebound who would head to the charity stripe for the one and one. Jansen didn’t flinch and knocked down both to put the Redskins ahead by 2. Sandusky’s full court pressure forced the turnover and Bad Axe was forced to foul and send Emmy Bender to the line with 3.7 seconds to go. Emmy Bender missed the mark and Bad Axe threw a hail mary shot that missed short and in the hands of a Redskin. Sandusky wins it 32-30 and improves to a record of 3-0 with the victory. Morgan Taege led the way for the ‘Skins with 8 points and Jenna Steeb added 7 more points from the bench. Brooke Jansen added 6 points, including the game winning free throws. Sandusky outhustled the Hatchets and forced them to make some fatal mistakes.

The Redskins travel to Vassar next Thursday for their last game before the holiday break. Sandusky will play Cros-Lex at Little Caesar’s Arena on December 29th before the Pistons take on the Knicks at 7:00 p.m. Tickets are available at pistons.com/sandusky.