Danielle Nowiski considers herself an everyday wife and mother, but her career is extraordinary. Nowiski has extensive medical background, including almost 10 years of EMS for Sanilac and Ogemaw Counties and North Flight, a ground-based Emergency Medical Service of northern Michigan. She also attended nursing school at St. Clair County Community College and was an ICU and Emergency Room nurse for five years at Port Huron and Marlette Hospitals.

In July 2014, Nowiski’s career took another remarkable turn when she applied for a job opening with LifeNet of Michigan as a flight nurse. She was sure it was a long shot, but applied anyway.

“When I heard I got the job, I had to sit there and soak in what happened. I was so overcome with emotion. It was a pivotal moment in my career and I just could not believe I was working at this level,” Nowiski says of getting the news that she received the flight nurse job.

LifeNet is a division of Air Methods, the most experienced medical aviation corporation with a fleet of 450 aircraft. LifeNet was established in 2004 and specializes in the rapid medical transport of the critically ill. The LifeNet helicopter is based out of Saginaw’s Covenant Hospital, but does not only have a partnership with the Covenant hospitals. The only community based air medical service in Michigan, LifeNet flies anywhere in Michigan. It bridges the gap between rural referring hospitals and larger hospitals, including a large number of flights in the Thumb.

Members of the flight crews of LifeNet must have an all encompassing background, including years of experience on the road as an EMT, a nursing degree, and experience with intensive care and emergency room services.

Nowiski explains that LifeNet’s focuses immensely on education, “Education is never ending at work, it’s constant,” she says. On average, 225 hours a year are spent on training and education. LifeNet crews train competitively with computer training and simulations, scrutinizing every last detail and training crew members how to react to the most terrifying of scenarios. When Nowiski is not flying, she is doing clinicals in the ER, continuing her education through simulations, or working to maintain a number of certificates.

“We have so many avenues of education,” Nowiski adds.

Public safety is nothing new to Nowiski. With a father and grandfather who were both firemen, she has always been interested in helping her community. “I have been surrounded by the best influences,” she says, “but even growing up in a big public safety family, I never believed I’d be doing this job.”

Nowiski has always had a passion for for pre-hospital, emergency medical services but never dreamed she’d be where she is today.

“I never made the career choice to fly, it was a matter of timing,” Nowiski explains. “It is such a humbling honor to be part of such a brilliant group of people.”

Nowiski admits that she often forgets the true capacity of being a flight nurse, “You forget how people look at you when you do a job like this.”

Being a LifeNet flight nurse has touched Nowiski’s life in more than one way. “It’s not just a job, but it becomes your everyday life. It really is a lifestyle,” Nowiski says. Her job gives her the opportunity to love what she does and while making difference, making it the best job in the world.

“As a flight nurse, I see people in their darkest hours. It’s my job to help them see another tomorrow,” Nowiski says.

Being a flight nurse has also changed Nowiski’s outlook on her own life, “I learned really quickly how short life is, providing me with a broader outlook on life. I now appreciate the little things.”

Nowiski and other LifeNet crew members touch the lives of others on a daily basis, but according to Nowiski, the community deserves the most recognition. LifeNet views itself as a resource to the community with the goal to outreach to the community and hospitals.

“We are so thankful for community support. We believe in community outreach and education and are thankful for every single time that we are called,” Nowiski says. 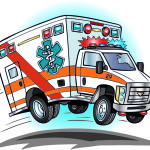 Previous Story:
First Responders to be Honored
Next Story:
What is Your Dental Hygiene Routine?