Rogers gives back to Marlette Schools

On Tuesday, May 1, Randall Rogers, a sixth generation Marlette graduate, was at the Marlette Jr/Sr High School to present a student with a trip to the Reagan Ranch in California to attend the Young America’s Foundation Conference. This trip will help to introduce high school students to Ronald Reagan’s ideas and the conservative ideas he championed.
Mr. Rogers graduated from Marlette Class of 1973 and went on to Michigan State University. After receiving his diploma in 1977, he spent 35 years as an agronomist working with the golf-turf industry throughout North America and Scotland. Randall feels that the Reagan years were a good and prosperous time in his life and young people could benefit from it. So he decided to give back to his community and help to expand the world views of young people at the same time.
Mr. Rogers contacted Principal Kohler about this scholarship he wished to set up. Students ninth – twelfth were able to apply and interviews were set up with all who applied. The winner would get air fair to and from Santa Barbara, CA where the ranch is located, as well as the three day stay for the conference. Competition was tough and in the end, three students were chosen to represent the Marlette area in August.
Those chosen are Emily Bell, junior, Margaret Mutch, junior, and Marissa Crase a sophomore. Congratulations to these outstanding students who will represent Marlette well. Thank you Mr. Randall Rogers for believing in where you came from and wanting to give back to the next generation. 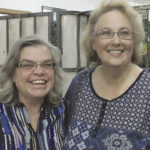