Although she never milked a cow in her life, Marilyn Warczinsky is a farmer through and through.
And, being a farmer is what she is passionate about, growing up on a dairy farm, and marrying a farmer, and instilling in her two children the same passion that she has for farming.
Marilyn (Hartsell) Warczinsky grew up on a dairy farm east of Deckerville, where she fed calves, and drove tractor from the time she could stand and push the clutch in. She graduated from Deckerville Schools and went to school to be an LPN. After working in Saginaw for a short time, she realized that “city life” wasn’t for her. Marilyn worked for Doctor Groat in Sandusky and was a nurses aid at Deckerville Hospital, but left nursing to take care of her two kids and the farm that she and her husband, Lorne, had purchased.
Marilyn is proud of the fact that they were able to buy back

Lorne’s family farm and also farm her parents’ farm. Starting out with 300 acres of land, they, along with their son, Steve, now have 1,000+ acres.
Lorne, a now retired engineer from Interlake Steamship, had a different work schedule than most people. He worked 60 days on the ship and was off 30 days. So, Marilyn was very busy operating the family farm and raising their two children, Caren and Steve. (Caren is also now married to a farmer).
Marilyn did and still does both spring and fall tillage for the farm, and when Lorne was away on the boats, planting and harvesting was hired out. She did and still does run the grain cart and helps with the unloading of the crops. The Warczinsky’s grow corn, wheat, black beans, soybeans and hay. They have never dairy farmed, but raise beef cattle (there is more flexibility with beef cattle).
Although farming is a business, it is also a way of life. Marilyn said, “I feel very blessed to have lived on a farm, and to raise the kids on the farm. I totally enjoy it.”
When asked if she ever felt any stigma from being a farmer as a woman, she quickly replied that she had never had any problems.
Marilyn feels as the average age of farmers is getting older, young people need to be encouraged to enter this field.
Marilyn said that cell phones have made farming much easier. From having to shut down to run to the house to make a call, now help is right at your finger tips. Marketing is also very important now, and is very challenging. With more acreage, the amount of commodities is higher, and you have to know what is going on with the markets. Computers have helped with this.
Marilyn served on the Deckerville Hospital Board of Directors, and the Hospital Auxiliary. She was also on the County Health Board. This gave her the opportunity to still be involved in the health care field. But, with the farm and also five grandchildren in school and participating in extracurricular activities, the decision to give them up was an easy choice.
In her spare time, Marilyn enjoys gardening and reading, and is also a member of St. John Lutheran Church’s Ladies Aide. 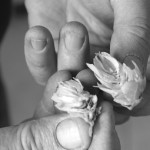 Next Story:
Hop to Success