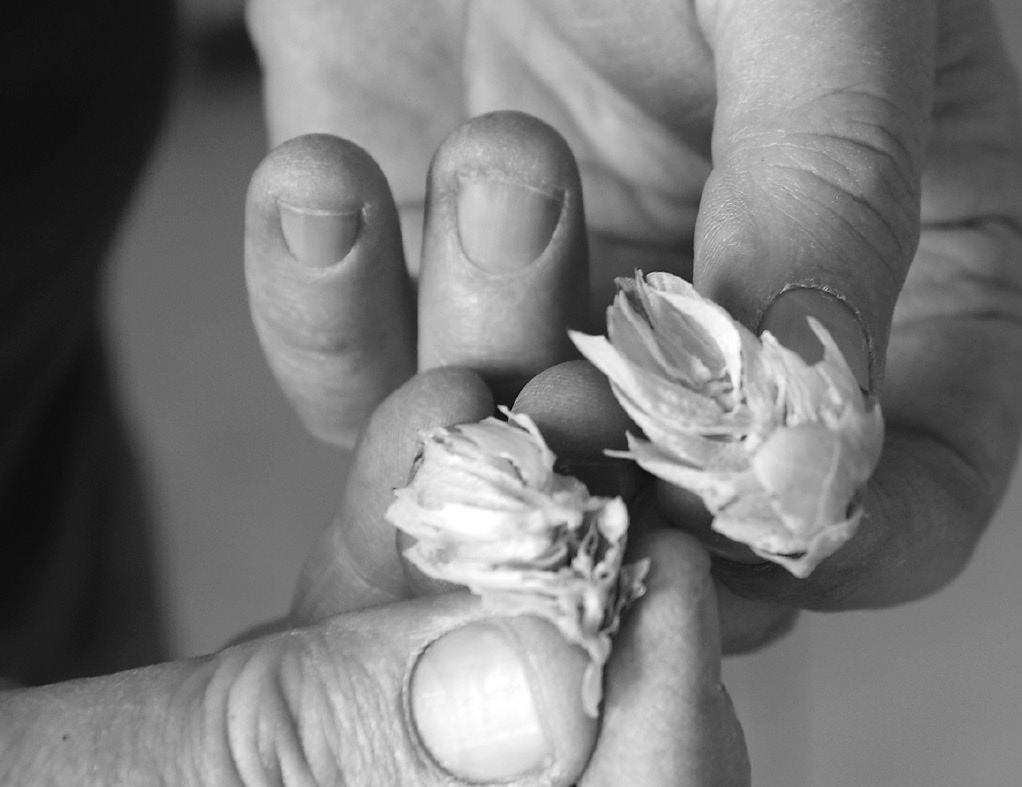 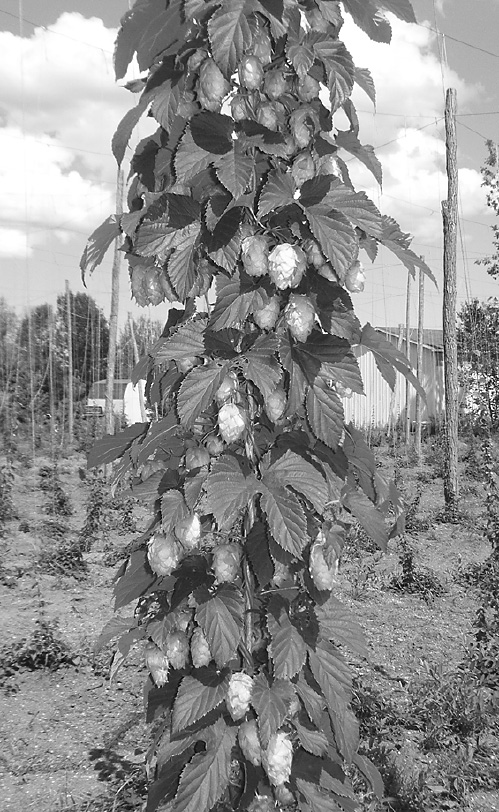 Hops, a fairly new specialty crop for the Sanilac County farming area, are finding success, in part to the latitude (hops belt) that Sanilac County lies on, along with its perfect soil conditions.
At present, Ron and Anne Hasenbusch and Dave Batkie are the only commercial “growers” in Sanilac County.
Ron and Anne Hasenbusch grow hops near Port Sanilac. They started as a commercial venture, but now primarily for their own brewing use, as they are the proud owners of Elk Street Brewery, located in Sandusky.
Anne, a school teacher, who became a stay-at-home mom while her children were young, and Ron, an engineer, have been in the area since 2011, although Anne is very familiar with the Thumb, coming up since she was five years old.
When In 2011, before the brewery existed, Anne, a former teacher went back to teaching, mostly as a substitute teacher, she couldn’t find the teaching position that she wanted and realized that she had “more to offer”, and Ron, who had been brewing his own beer since 19854, and had numerous compliments on the tastes of his brews, decided to take the plunge, and began this new labor intensive venture, starting with 3,000 rhizomes of nine different varieties, and starting Barkshanty Hops, LLC.
Dave Batkie, another commercial grower, and owner of Elk River Hops, is located on Frenchline Road. He grows hops commercially. Dave Batkie, started his venture in 2008, on his parents’ family farm. He, along with his brother, Mark, and son, Michael, grew six varieties of hops this year. Between the Hasenbusch’s hops and his, they hope to have between 10 and 15,000 pounds of hops next year.

For the Hasenbusch’s, they (along with a lot of help from family their sons, Ron and Zach and father, Don Bassett), cleared mostly black locust trees, which they used for the poles to build the infrastructure, to hold up the hops to grow on (locust trees are good to use because they don’t rot quickly). Cable is cross threaded at the top of the 22′ poles and used to place cable onto, on which string is fastened to at the top, so that the hops can climb upward, growing as much as 6-8″ inches in a day. (If you are driving and notice numerous poles sticking out of the ground in a field, and are scratching your head trying to figure out just what it is, you have come across a hop growing structure). The other end of the string is anchored down, so the “all female” hop plants can grow upward, growing clockwise (with the sun) on the string. Dave opted for readily available treated posts to build his infrastructure. Both work equally well.
The hops have three-foot spacing between each other, and need nutrients to grow sufficiently. They are watered by a drip-line irrigation system, as they don’t like to be wet. Ron and Anne planted their hops (as rhizomes) east-west, giving the plants better air circulation. The somewhat aggressive plant, takes up to four years to mature, and can live about 25 years. The rhizomes shoot off numerous runners, but only 2-3 are left, and allowed to grow on the string. Batkie’s start their hops as plants, ensuring that they are free of disease. They “hill” their hops and put liquid fertilizer right into the drip line. They use 200 pounds of nitrogen per acre.
Hops can grow to over approximately 20 feet. The bine (stem) has hair-like tendrils on it, called trichomes, which adhere to the surface of the line. Hops need eight hours of sunlight during the growing season, and two months of winter below 40 degrees.
The cones, which are considered an herb, grow up high on the plant., and were for a long time, hand-picked. Ron and Anne picked their harvest the first year by hand, but as Ron is an engineer, it didn’t take long for him to design a machine to pick them.
Dave owns his own “combine” and he and the Hasenbusch’s use it to process the hops. The Batkie’s eventually hope to become a hops consolidation center for local hop growers. They, along with the Hasenbusch’s and several other growers in and out of Sanilac County, have joined forces and formed a representative group called Eastern Michigan Independent Hop Growers.
Although a vigorous plant, hops are susceptible to disease; – powderly powdery mildew, downy mildew and verticillium wilt included. Aphids, leafhoppers and spider mites like to chew on them, too (although deer don’t like them). Although not practical to be organic, Ron and Anne use the least amount of fungicides and pesticides that they can. Dave feels the same way, using pesticides and fungicides when needed, and spraying fungicides every two weeks.
The flower (cone) is harvested in late summer/early fall, when the moisture content is at about 24. It is dried down to approximately 11% moisture, dried at 80-90 degrees. It is compressed into either pellets or plugs. Dave said the process of drying the hops takes about 12 hours. Ron and Anne use whole cone plugs, which they freeze, as does Dave. Ron brews every week using hops grown in Sanilac County.
Hops add bitterness to beer, along with adding different characteristic flavor. Hops are a natural preservative and help to makes a robust head on beer. Hops sells anywhere from $15 to $17 per pound, and mature plants can produce approximately 2,000 pounds per acre. 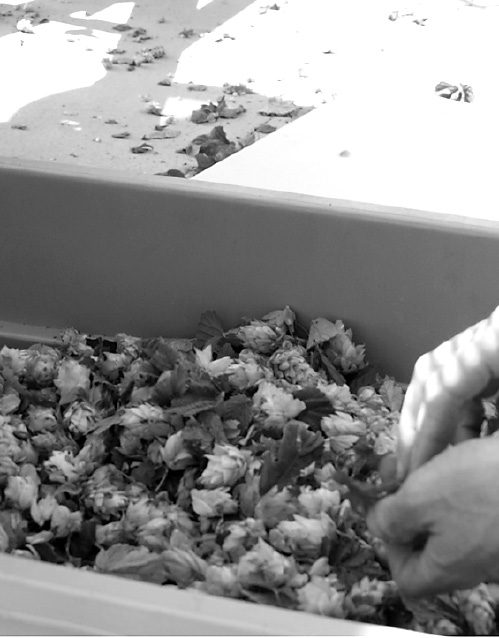 Next Story:
Apples all day keep the Doctor at Play