The 2018 boys Team Tribune Recorder Leader recognizes varsity basketball players from the Tribune’s coverage area for their efforts of the past season.
SANDUSKY – Josh Sauer and Trenton Lee
MARLETTE – Bryce George and Sean Quade
DECKERVILLE – Wyatt Janowiak and Kenton Bowerman (Sixth Player)
Boys Honorable Mention: Sandusky – Cody Hoag and Jared Bender; Marlette – Marcus Armstrong and Bret Havens; Deckerville – Cole Romzek and Isaac Keinath.
Several players from three teams have been recognized, led by a pair of big men from Sandusky and Marlette.
It was an up and down season for the Sandusky Redskins in terms of wins and losses as they finished around the .500 mark for the season. over half of their losses were by narrow margins that could have easily gone in the win column with a few more breaks.
Coach Tristin Pennington’s squad was extremely athletic, led by Josh Sauer, Trenton Lee, Jared Bender and Cody Hoag. Those four, along with others, came together late in the season to win some key games. Sauer, Sandusky’s offensive and defensive leader, was one of the best in the GTC-East.
The 6’6” big fella led the team in scoring with 250 points (12.5 a game) and averaged 11 rebounds a game. He had a season high 28 points against Memphis and led the team with 18 boards in a game with Ubly. He shot 62% from the field. Lee had a solid year for the Redskins, averaging 10 points a game and finished with 54 rebounds and 51 assists. He had a season-high 27 points vs Yale.
“Sauer was a force, for sure,” said Coach Pennington. “He played big and really gained a lot of confidence as the year went a long. Lee did a great job for us, too. Those guys made a great inside-outside option for us, and also gave us two big guys down low when we needed it.”
Bender, one of several talented Sandusky guards, scored 10 points per game, despite missing portions of the season with various injuries. Hoag was the team’s defensive specialist, drawing the tough assignment of guarding the opposing team’s best player. He also had an impact offensively, including against Brown City where he scored 26 points.
In Marlette, it was the Bryce George and Sean Quade show, sprinkled with a little Marcus Armstrong and Bret Havens for good measure. After earning a GTC-East title a year ago, the Red Raiders found themselves struggling in the early parts of the season.
Following the Christmas break, Marlette found new life and caused plenty of headaches for their opponents. The Red Raiders reeled off four straight wins to open league play and found themselves playing for a league championship in the last game of the regular season.
“I am really proud of these kids,” said Coach Chris Storm. “We struggled early, but they grew together and had a great second half. I was pleased with their character and how they developed. Obviously, Bryce and Sean were key to us – but Bret and Marcus had great years too.”
Marlette enjoyed good post season success as well, defeating GTC-East foe Sandusky to advance to the Class C finals in Dryden before bowing out in a tough overtime loss to Capac in the championship game.
The Deckerville Eagles were led in points by senior Wyatt Janowiak with 257 points. He was 56 percent at the free throw line, shooting 56-99. He had 57 offensive rebounds for the team and 37 assists. Janowiak had 112 defensive rebounds and 14 steals for the season.
Coach Tim Brabant said, “Wyatt had an excellent perimeter shot and good foot and handwork.
Kenton Bowerman was chosen as the Sixth Player for Team Tribune. He added 175 points to the Eagles tally for the season. Bowerman was 11-32 shooting 3-pointers. He had 15 offensive rebounds and 59 assists. Defensively, he had 41 rebounds and 73 steals. Brabant said, “Bowerman had a relentless hustle, both on offense and defense.”
He continued, “Both Janwiak and Bowerman were both excellent leaders on and off of the court. It was asked of the seniors to leave the program better than what it was when they started, and they did.”
Brabant added, “The kids did a good job adjusting to a new coach and had an excellent attitude.”
Both Cole Romzek and Isaac Keinath added to Deckerville’s mix. Romzek contributed 112 points for the season and Keinath, 78. Romzek had 54 defensive rebounds for the season, with 14 steals and 52 assists. Keinath had 32 assists for the year, and had 12 3-pointers. He stole the ball 22 times and had 29 defensive rebounds. 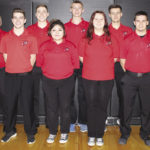