Clutch hitting and strong relief pitching helped spark the Sandusky girls softball team to a doubleheader sweep over Memphis last week. The Lady Redskins took the opener in a romp, winning 16-2 while they needed some late-game heroics in the nightcap to pull out a dramatic 11-10 win.
In the opener, an 11-run fourth inning was all Sandusky needed to pick up the GTC-East win. The Lady Redskins batted around the order with Katelyn Tomichek picking up two 2-run hits to knock in four runs in the uprising. The big inning was highlighted by a grand slam home run by Madison Winarski, her first home run of the season.
In the next inning, Taylor Calkins belted a three-run homer and Tomichek drove in two more runs, giving her six for the game, as the Sandusky girls turned the game into a mercy-rule win. Sandusky senior Haley Nelson went the distance on the mound for the winners, striking out seven Memphis batters.
Things were a little different for Sandusky in game two. After taking a 3-0 first inning lead, the Lady Redskins rallied to tie the game at 10-10 in the fourth inning behind a two-run double by Cassidy Albrecht. In Sandusky’s half of the fifth inning, Calkins once again used the long ball, crushing another home run for the winning run and a 11-10 victory. Nelson came on in relief late in the game and struck out seven more batters to get the win.
“The girls never gave up in Memphis,” said Coach Danny Franzel. “We had some big hits, some key hits and we were able to get a couple. We are working hard now to finish the season strong as we head in to districts June 2nd.”
Sandusky will be at the Caro district June 2nd. 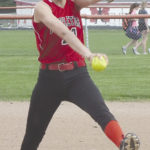 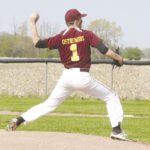