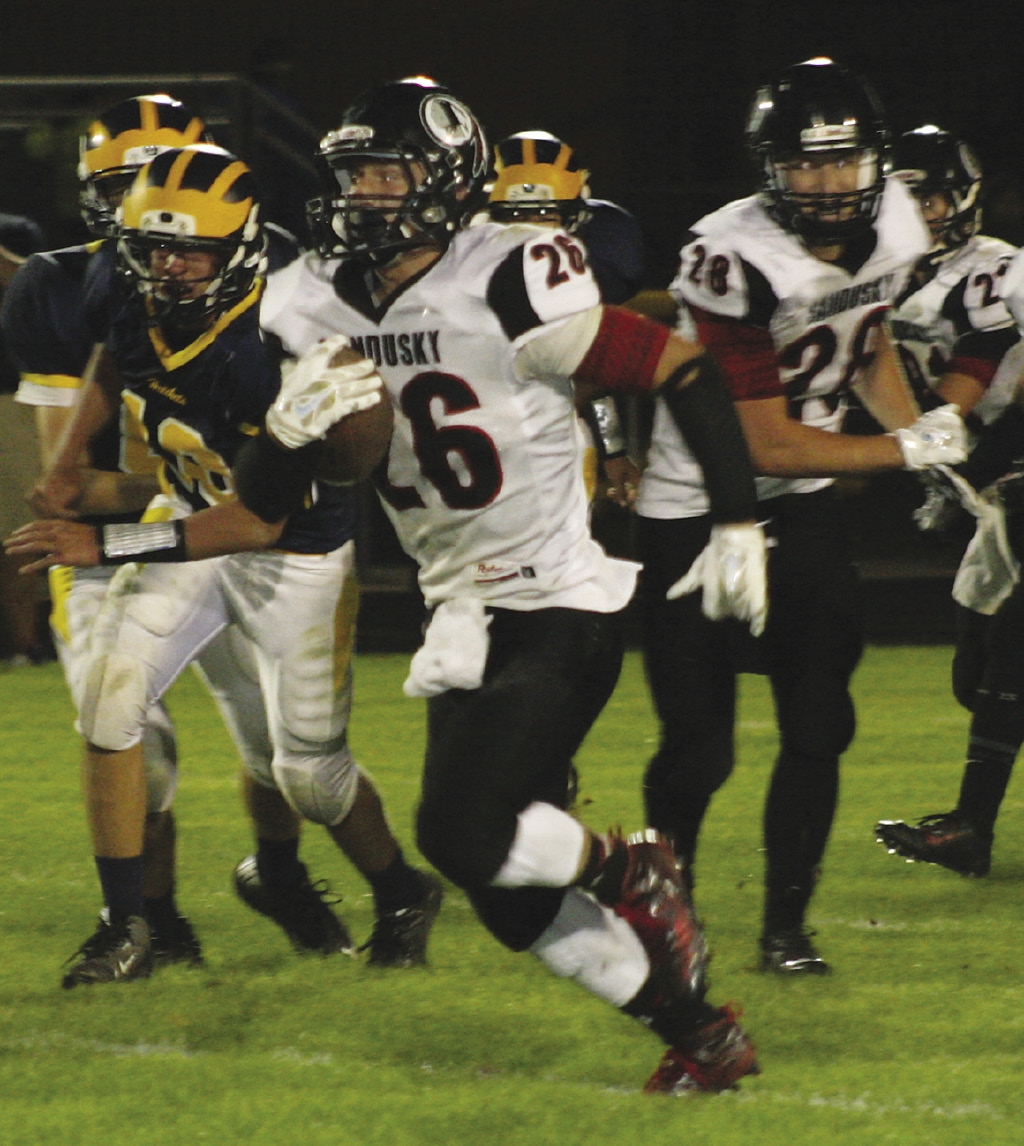 Friday night’s clash with GTC crossover foe Bad Axe lived up to everyone’s expectations who were expecting an exciting game. The Hatchets, with one of the top quarterbacks in the entire Thumb were ready for the unbeaten Redskins.
However, Sandusky has a star of their own in senior running back Chase Tucker. Bad Axe had no answer for him. Tucker, certainly among the top two or three running backs in the area, had a night to remember. When the dust had settled, it was Tucker and the Redskins defense that led the way as Sandusky rolled to a 35 to 26 victory.
“That was a great game,” said Redskins Coach Craig Jacobson after speaking to his team following the game. “Bad Axe is a very good team. We beat a good team tonight. What can you say about Tucker’s performance? He has a lot of pride, is a hard worker and runs hard. He is a fierce competitor who has a lot of pride and he wants to win.”
Tucker ran wild over the Hatchets, gaining 300 yards rushing on 21 carries. He scored all five of Sandusky’s touchdowns, four rushing and the other was an electrifying 80 yard kick-of return for a TD. The star athlete had 411 yards of total offense for the Redskins Friday night. Tucker now has 10 touchdowns on the season and has rushed for nearly 600 yards in three games.
Bad Axe took an early 14-0 lead on a pair of Tommy Morneau scores before Mr. Tucker made his presence known. He bulled his way over the goal line from a yard out to make it a 14-7 game and then set sail on a long touchdown run, galloping 53 yards to the house to knot the game at 14-14. It appeared Bad Axe may take the lead just before halftime, but a strong defensive stand by the Redskins stopped them short of the goal line on a fourth down play as time expired.
That defensive stand seemed to spark the Sandusky offense who came out fired up in the third quarter. Tucker brought the Redskin faithful to their feet with TD runs of 53 and 59 yards on consecutive possessions and after another Hatchet score, he took the ensuing kick-off 80 yards for a touchdown.
Bad Axe responded with a quick scoring drive to pull to within a score of Sandusky, but failed to convert the point after conversion. Tucker stuck the dagger in the hearts of the Hatchets on Sandusky’s next possession. A one play scoring drive was capped when the senior bolted 57 yards to the endzone. One last strong defensive stand halted any hopes BA had of some sort of rally.
“Our defense played a great game,” Jacobson pointed out. “That whole front line kept pressuring them all night long and made some huge plays for us. They made the big plays when we needed them. This was a great team win for us.”
Wray DeVault had 40 yards rushing on six carries for the ‘Skins and Joe Stone added 39 yards on 11 rushes. Brandon Potter was a perfect 5 for 5 in kicking extra points.
Sandusky, now 3-0 overall, will begin GTC-East play Friday night when they host defending league champion Harbor Beach. The following week, they will venture to Ubly for another tough league matchup with the Bearcats. 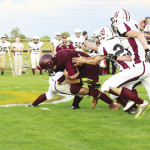