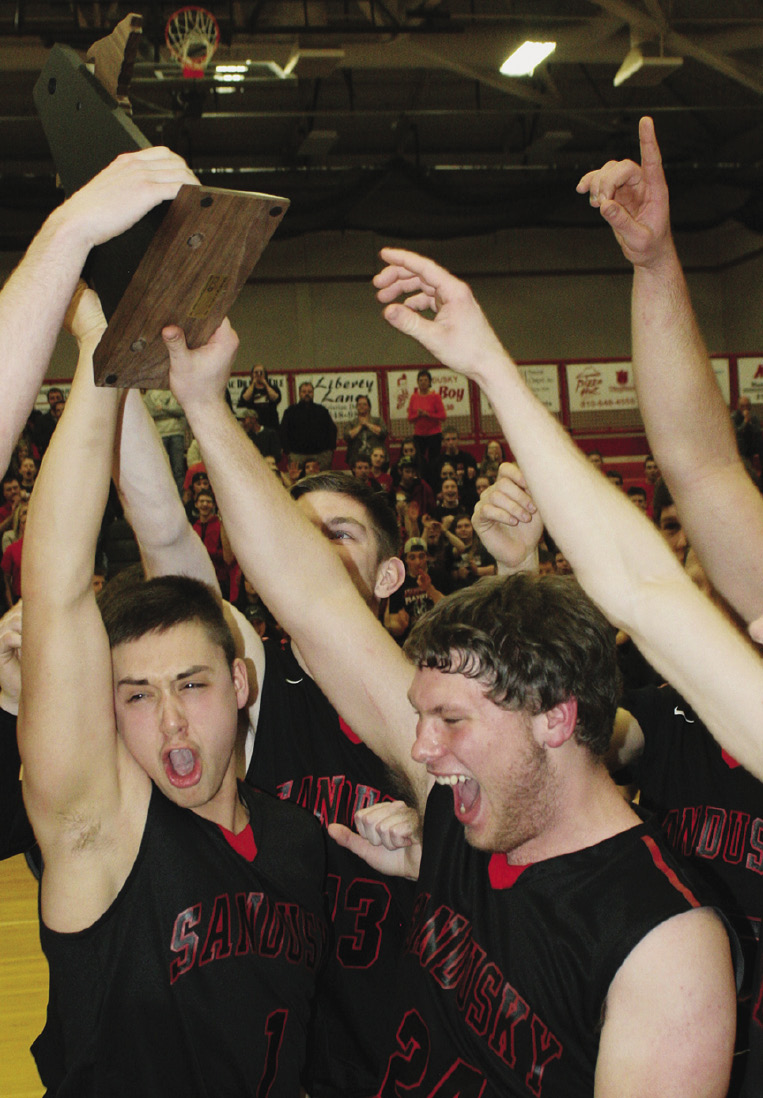 It’s been a familiar scenario for the Sandusky boys basketball team the past two season. Each year, with a talented group of players, they’ve been close to a league championship but came up short. And, each year, they’ve managed to play perhaps their best basketball of the year come tournament time.
Friday night, thanks to a strong defensive effort against rival Marlette in the Class C district championship contest, the Redskins (15-8 overall) claimed their second consecutive district title in dramatic fashion, winning 37 to 33. Last year, it was a buzzer-beating shot by Connor Green that led the ‘Skins to victory over the Red Raiders. This year, it was clutch free throws in the final seconds by Danny Hale and Justin Miller that pulled out a thrilling win.
“We’ll keep taking them any way we can get them,” said a relieved Sandusky Coach Tristan Pennington following a wild mid-court celebration between players, coaches and fans. “The kids battled hard and they never gave up. They kept talking all game long, we’ve got this, stay together. And, they did. I am really proud of them. Marlette is a very good team. This was another battle, one that we were fortunate to come away on the winning side of.”
Just as both teams expected, the game was evenly matched the entire game.
After the Red Raiders had taken an early lead behind Isaac Dale and Ethan McKenney, a Brandon Potter three ball knotted the score at 7-7 with 1:50 showing on the clock and a three point play by guard Joe Stone gave Sandusky their first lead at 10-9 a few seconds later. Marlette got the ball back and scored before the end of the quarter for a slim 11-10 advantage after one.
Sandusky went on an 8 – 2 run midway through the second quarter on a hoop and a foul shot by Josh DeKam, a bucket by Justin Miller on a nice dish pass from Potter and a Miller triple to make it a 22-18 edge for the Redskins at the half.
Marlette’s high scoring guard Andrew Storm was held scoreless for three of the four quarters, thanks to a strong defensive effort by Hale. Storm managed all six of his points in the third quarter, two on a dunk when he suffered a cut finger. Twice, the Marlette bench was allowed to tend to Storm’s injury by game officials while he was still on

the court, instead of the Red Raiders being forced to call a timeout. Storm did not score after the injury to his shooting hand.
McKenney hit
his second triple of the evening to give Marlette a 28-26 lead entering the fourth quarter before the Redskins changed the momentum.
An 8-0 run to give Sandusky the lead back (34-30) with 2:48 remaining was sparked by back-to-back three point shots by Miller and Potter. The inside-outside duo combined for 9 of their team’s 11 fourth quarter points. Miller and Hale netted 3 of 4 free throw attempts in the closing seconds to seal the win.
A balanced scoring attack led Sandusky as Miller and DeKam scored nine apiece while Hale and Potter (seven rebounds) pumped in eight points each. Joe Stone (five rebounds) added three points. The Redskins finished 8 of 10 from the charity stripe and hauled in 22 boards in the game. Marlette was led by McKenney with 11 points (three triples), Dale had seven and Storm scored six. The Red Raiders went just 3 of 8 from the line.
With the win, Sandusky advanced to the Class C regional at Flint Hamady Tuesday night where they went up against a strong Southfield Christian (19-2) squad in the first of two semi-final games. The winners meet for the regional title on Thursday night. 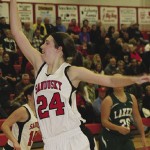