Nothing could stop Deckerville teams these past couple of weeks of playoffs!
Football had an exceptional game last Friday against Morrice that ended with Eagle victory! Earlier in the season, Morrice caused the one and only Eagle loss. Our boys came back better than ever last Friday and beat Morrice 40-20. This win made us regional champs. Our Deckerville boys also held Morrice to their lowest score ever this year. Quarterback, Brandon Pattullo says, “Overall we had good game. The offensive line blocked great. The defensive line and backers gave great pressure on Morrice’s offense.” Next Saturday the boys play against Battle Creek St.Phillip in Battle Creek at 2:00 p.m. Keep up the good work boys!
Last Thursday, Varsity girls volleyball became District Champs after five games against Carsonville-Port Sanilac. The girls also beat Kingston in five games last Tuesday. The girls have been working harder than ever these past couple weeks in playoffs. This is the ninth year in a row that Deckerville volleyball has won districts. The real test will be on Tuesday the 10th, when the girls travel to Owen-Gage for regionals to play against Marine City Cardinal Mooney. Good luck girls!
State finals for cross country was last Saturday also. Our girl runners for Deckerville were Kylee Colesa and Catherine Sanford. Stephen Barker represented our boys team. The race was at Michigan International Speedway. All of the runners did well, but none of them placed very high. On a higher note, all three of these runners are only sophomores and still have two more years to keep improving.
To any Deckerville students reading this, congratulations, you have survived the first marking period! The first nine weeks of school (with no breaks or days off) are over!
Report cards will come out Friday, November 13. Our first day off of school will be the Monday, November 16.
JV and Varsity girls basketball starts Monday, November 9. 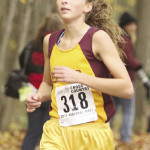