Change of the Guard 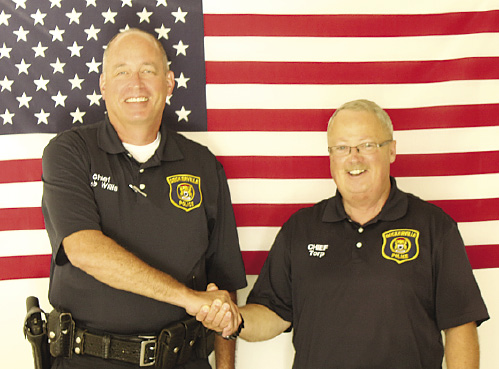 Bob Willis (left) recently retired from the Sanilac County Sheriff’s Department, and has taken over the position of Deckerville Village Police Chief, since the retirement of Tim Torp.
Willis, after serving in the Army, went to work for the Sanilac County Sheriff Department, starting as a corrections officer at the jail. He was advanced to traffic duty, and became a deputy. He has served as both sergeant and lieutenant for the Sheriff Department and racked up 13 years of service on the Drug Task Force.
Willis is looking forward to being a “small town cop” and is “happy to work for the Village of Deckerville”. He has plans to update the computer system as part of his job.
Willis lives in Forester Township, part of the Deckerville School District. He has two grown daughters.