The Deckerville Eagles were on the road for the second week in a row, and again, the boys brought home a win, 40-28. The boys defeated Capac, 40-28.
Quarter scores: Deckerville – 8-0-14-18; Capac – 8-8-6-6.
Capac looked like they were going to give the Eagles a battle, but by the second half, the Eagles wore them down and took control of the game. Capac scored first, and got the 2-point conversion. Deckerville added 8 of their own, just before the first quarter was over, for an 8-8 tie, when Hunter Garza had a 3-yard run for a touchdown, and Peter Lapp ran in conversion.
Capac added another 8 in the second quarter, with the conversion run good. The Eagles were held scoreless in the second quarter, for a 16-8 halftime lead for Capac.
The Eagles came out after halftime ready to play, scoring 14 points, first on an 8-yard pass to Connor Palmer for a touchdown, with Peter Lapp running in the conversion. Connor Palmer got his second touchdown of the night on a 55-yard pass from Hunter Garza. The run for the extra 2 points failed. Capac added a touchdown of their own, with their conversion failing. The score was tied 22-22 at the end of three quarters.
In the fourth quarter, Deckerville was awarded 2 points on a safety. (because it was fourth down in the end zone and Capac intentionally grounded the ball.) Deckerville scored again, when Peter Lapp ran in a touchdown and also the conversion for another 8 points before Capac ran in the ball for a touchdown for their final points in the game. Peter Lapp scored again on a pass and Parker Merriman on a 3-yard run.
Coach Bill Brown said, “Our players played a great game after being down 16-8 at halftime. Our team showed a lot of character in a come back and win at every facet of the ball game.”
Deckerville rushed 55-233 yards, Capac 27-96. The Eagles passed the ball 7-13, for 143 yards and Capac, 5-12-22.
Rushing for Deckerville, Peter Lapp led the way, 23-108 yards, Hunter Garza 15-61, Kris Kosal 8-40, Dylan Ball 4-20 and Parker Merriman 1-3.
Hunter Garza was 8-13-154 yards passing, receiving Colton Palmer 4-101, Peter Lapp 2-37, and Derek Osborne 2-4. 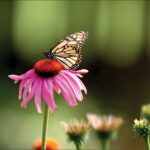 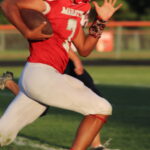