The Thumb Area Legion traveled to the West Shore Community Ice Arena in Scottville to take on the Lakeshore Badgers last Friday. The teams remained scoreless through the first period. The Legion caught fire in the second period, scoring three unanswered goals. The Legion scored three more unanswered goals in the third period to shutout the Badgers and take a 6-0 victory. Caleb Lentner led the way with four goals and an assist for the Legion. Chase Talaski added a goal and an assist. Matthew Cummings scored a goal in the win. Marshall Ryan, Dylan Ball and Gabe Vanderlip each had one assist. Wyatt Ryan finished the game with two assists. Seth Hiles earned the shutout for the game with 18 saves on 18 shot attempts.
The Thumb Area Legion continued their road trip Saturday when they traveled to the Gladwin Community Arena & Fitness Center in Gladwin to face off against the Bay Area. Bay Area grabbed a 2-1 lead in the first period and held onto the lead for the remainder of the game. The Legion scored another goal in the third period but Bay Area already had four of their own and held off the Legion, 2-4. Caleb Lentner and Wyatt Ryan each had a goal in the loss. Emma Dickendesher and Matthew Cummings notched assists in the game against Bay Area. Lauren Eager tended goal for the Legion in the loss, saving 25 of 29 shots on goal for a save percentage of 86.2%. The Legion traveled to Marysville Monday night for the last game of their four game road trip before returning home to face off with Genesee on Tuesday. Results were unavailable as of press time. 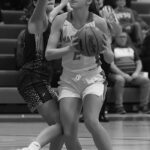 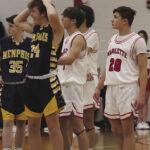 Next Story:
Sartin Drops 23 in Win over Memphis