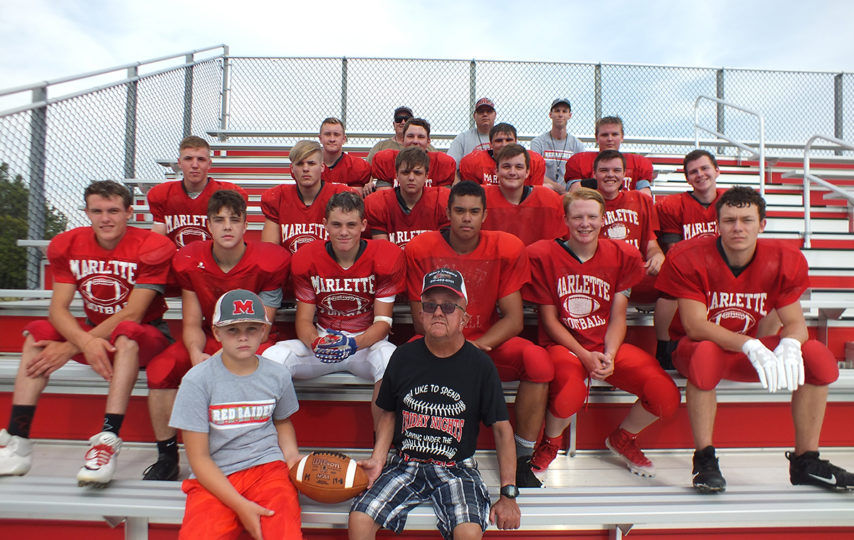 “Hold the Rope”
Coach: Dennis Lester
Years as Head Coach at Marlette:  17
Overall Head Coaching exp:  17
Overall Record Last Year: 3 win 6 losses
Conference Record:  3 win 3 losses
Career Record at Marlette:  79 wins 81 losses
Overall W/L Record: 79 wins 81 losses
Players lost from last year:  9
Returning Letterwinners:  10
Starting Offense Returnees:  8 Starting Defensive Returnees:  6
Primary Offense:  Spread
Primary Defense:  Multiple
Key Returnees: Peyton Dale, Jr., QB/DB; Edwin Fuller, Sr., WR/DL; Chyler Chisholm, So., TE/LB; Ian Schetter, Jr., RB/LB; Leo Macha, Sr., OL/DL; Dustin Cummings, Jr., OL/LB; Seth Bussure, Sr., OL/DL
We are a very young team this year. We only have seven returning letter winners. We have Peyton back at quarterback and he really did a nice job last season. He really grew as a runner and I expect him to pick up where he left off. Leo is our only returning lineman. He started at center last year. We are going to lean on him heavily for his leadership. He has had a great preseason. Ian had a nice season for us as a sophomore last season. He got a lot of experience running the ball. He also started on defense. We are excited to see him this season. Chyler had an outstanding season last year starting both ways as a freshman. He has worked extremely hard in the offseason and we expect him to really lead us on defense this year. We brought Dustin up last year after our first game and plugged him in at linebacker. He really grew throughout the year. That experience should really help him. He will also be playing on the offensive line this year. Edwin is a tough kid. He played a lot on the defensive line last year. We expect him to really be a nuisance with his quickness. Seth was behind a lot of seniors last year and he is really hungry. We like how hard he has been working in practice.
Key Newcomers: Tristan Creighton, So., RB/DB; Travis Fuller, So., RB/DB; Myles Parker, So., RB/LB; Brenden Whiteside, So., OL/LB; Jack Macha, Fr., OL/DL; Cody Hatcher, Jr., OL/DL; Josiah Hager, Jr., TE/LB; Patrick Cummings, Jr., OL/DL; Marcus Rachow, Sr., OL/DL


Our newcomers are working hard and competing in practice.  We will ask all of these guys to contribute a lot this year. Travis, Tristan and Myles are all very good athletes and we will ask them to do a lot in the backfield for us this season. They will also be starting on defense. Jack, Brenden and Patrick are all battling for spots on the offensive line. They are young but very good players. We expect them all to grow as the season progresses. Josiah has looked good at tight end. He has good hands. Cody Hatcher is a promising player on the defensive line. He is very strong and can make an impact for us there.
How I see this year’s team: This year’s team is very young. We do not have a lot of experience. With only five seniors, youth is definitely served. We are really just concentrating on improving each and every day. If we can do that, we will be competitive. I like the way we are competing in practice. We are seeing some positive strides already.
League outlook: I really believe that there are three teams that are very strong this year in the GTC East. Harbor Beach is coming off a season where they lost in the semi-finals. They have most of those guys back so they are really in a good spot to start the season. Ubly took Harbor Beach right to the end in a great playoff game. They have some really nice players coming back including the best quarterback in the East in Casey Sweeney. He is quite the ball athlete. Sandusky will also be very good. They did lose some good seniors but they have a great junior class. Those kids are very good players. I think they will be right there with Harbor Beach and Ubly. I think we are in the same boat as Brown City. We have some good talent but we are very young. We will both improve as the season goes on. Both Memphis and Capac have new coaches so it is hard to tell how they will be.

Coach Dave Hayden
2018 record: League: 3-2-1 Overall: 8-6-2
Key returning players: Kobe Mahaffy will play a key role as a sweeper on defense. Kolby Gyomory will be our central mid fielder this year and will have to replace a key player in Sean Quade. Kolby showed good development at the center position last year and should hold down that position well. Cole Ellis along with Kobe Mahaffy will play sweeper for us. I have seen improvement out of both of these guys and I believe they will help not only shore up the defense but also be good leaders.

Avery Clark will play in the center as well and does a good job distributing the ball and also has a big body to help with the defensive side of the position. Jacob Winans will play goalie for us and I believe will fill Marc Mason’s roll well. Marc is a huge loss for us but Jacob seems to be up to the task of filling that spot. Cody Hayden, Luke Ross, and Luke Schuitman will lead the team as forwards. Cody can distribute the ball and has a forceful shot that will pose issues for opposing teams. Luke Schuitman is the best ball handler and finisher on the team. Luke will do good things for us as far as scoring and distributing. Luke will be the guy that teams will have to pay a great deal of attention to opening things up for others. Luke Ross will be the guy that will distribute the ball to the other guys up front. Luke has improved dramatically with his ball handling skills and should draw attention to himself leaving others open. Reagan Wilkinson, Isaac Seaman, and Gavin Gage will be other key players in the defensive and midfield ends. Other key returners include Bryce Major, David Dillion, and Alex Liang.

Key losses to graduation include: Sean Quade, Logan Solgat, Marc Mason and Colin Ferguson.
Top new prospects: Nate Mohr, Evan Clark, Dakota McCombs, Tristen Hayden, and Dylan Rauch.
This year’s team: The strength of this year’s team will be the leadership and abilities given by the key returning players mentioned. I believe our strength will be our defense initially but by the middle to end of the season Luke Schuitman, Cody Hayden, Luke Ross, Kolby Cyomory, Avery Clark and the rest of the midfielders will gel into a strong offensive unit. We also have younger players that are fast and aggressive with the ability to score goals. The team has some good talent it is up to the coaching staff to put that together and get them playing as one.
League is up in the air this year with each team in the league having the capability of winning it. Capac will be a tough new challenger and as always Memphis will field tough competitive teams.

Coach: Brandi Bishop, 3 years freshman, 2 years JV, 1st year varsity
Team’s Record and finish last season in league/regional: 7-5 in league, lost first round of districts
Key Returners: Josie Schuitman(Sr.)- has great knowledge of the game and is very consistent, Jordyn Boyne(Sr.)- is very quick and reads the ball well defensively.
Key Losses to graduation: Hannah Bednaryczk and Haley Ross
Top New Prospects and Grade: Kennedy Lefler(Sr.), Brianna Crane(Sr.), Taylor Donley(Jr.), Marisa Anderson(So.)
Player to Watch with comment: Sidney Coltson- she controls the game and communicates well with the hitters. She also has a hard serve that she can place.
Team Captains: Elizabeth Rohling, Sidney Coltson, Kennedy Lefler and Josie Schuitman
Team Strengths: The girls work well together as a team and trust each other.
Team Goals: To be a top contender in our league and to win districts.
Comments on your League/Conference: I think Harbor Beach will be tough this year and Brown City will be rebuilding but are very well coached.
Season Outlook: We are looking to be very competitive in the league this year and make a run for a district title.

Head Coach: Chris Titus
Assnt Coach: Amy Ford
Key returning runners: Riley Ford, Marissa Crase, Olivia Storm, Emily Martinez and Carleigh Nickens
Comments on returning athletes: Riley has really shown consistency as one of the top runners in the regional and state. She has worked hard during the summer to prepare for her final season and I expect she will do well. Marissa finished the year strong last season so I expect her to drop her time considerably in races this year. Olivia, Emily and Carleigh all will work hard to improve their racing times as well, each looking stronger in early practices.

Lost to graduation: Alivia McCombs, a team leader
New athletes on the team: Emma Alberston so great potential and has worked this summer to get ready for the season. Abby Meyers is an incoming freshman who also has talent and a desire to improve.
Team Outlook and Goals: The team should compete for a league championship and a spot in the Regionals, with the goal of advancing to the State Finals. 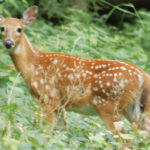 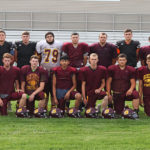