The McGregor United Methodist Church will be celebrating 100 years during the Sunday, September 18 service, with memories of the last 100 years, and a potluck dinner afterward.
The Bridgehampton Methodist Episcopal Church, which was located southeast of McGregor, closed in 1920. In 1921, land was purchased from Lydia McGregor and family, and the unused building was moved to McGregor in 1922, where the First United Methodist Episcopal Church of McGregor was established.
Eighteen years later in December of 1940, the church building burned. Services were temporarily held at the McGregor School and the McGregor RLDS Church. A new church building was erected and dedicated in 1941.
Over the years the need for expansion prompted the construction of north, east, and west additions to the building, as well as obtaining more land.
Jerry Griggs is the current Pastor at McGregor United Methodist Church, and has been for 24 years. Pastor Jerry and his wife, Cheri, reside in Peck, where he is also a farmer. They have three children.
In 2021, the Carsonville United Methodist Church closed and membership was transferred to McGregor United Methodist Church.
The church service starts at 10:30 a.m.
Going in to the future they are looking forward to starting the next 100 years and continuing to grow spiritually. 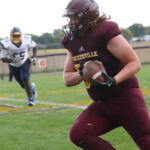 Previous Story:
Eagles Back on the Road; Hope to Recover from Loss