The Sandusky golf program has added another league championship to their trophy case, following a strong showing at the league tournament at Verona Hills Monday. Sandusky, with 361 points, turned in a solid performance, easily out-distancing runner-ups Ubly and Brown City who tied with a pair of 374’s.
The Redskins, led by senior Ben Jones, took an early lead on the front nine and continued to play solid on the back nine to finish 13 shots ahead of the nearest competitors. Jones fired a round of 89, tying with teammate Parker Marks for second place in Monday’s match, three shots behind Ubly’s Jake Uhl who won medalists honors with a fine 86.
Marshal Holt carded a 91, good for fourth place for Sandusky while Ethan Roggenbuck was one stroke back, coming into the clubhouse with a 92. Sandusky has won seven of nine league meets on their way to the championship. With the final league tally complete, Sandusky won the league with 34.5 points, Brown City was second with24.5 points and Ubly was third with 22 points.
As a result of the final standings, Sandusky has placed three golfers on first team All-Conference with two others earning second team accolades. Jones, Holt and Marks were named to the GTC-East first team while Roggenbuck and Blake Kartanys landed on the second team.
Joining the Redskins on the first team were Brown City’s Mitch Conley and Ubly’s Jake Uhl while second team members, along with the two Redskins, were Blake Badger of Ubly and the Brown City duo of Jared McPhail and Garrett Kunz. 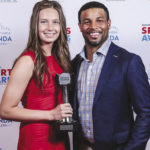 Next Story:
Nelson “I Am Sport” Winner